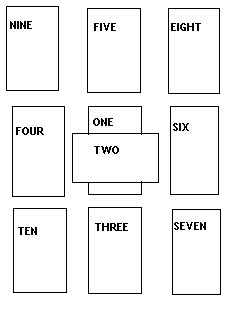 I have had some people ask about a Tarot layout I sometimes work with as it is slightly unusual. I had been working with a standard Celtic Cross layout, probably the most widely used, for a great many years. It is similar to the layout on the left except that the last four cards are placed on a line to the right of the first six (hence the “Cross” part of it’s name). One day my hands just insisted on placing the last four cards in the corners of the cross, counter clockwise, and I have done it that way for a different perspective ever since.

This produced a lot of new insight for me and it also broke me from the linear thinking of the old layout. It works strongly with reading card combinations. Predominance of suit and number are more evident and it also allows me additional lines to work with. The layout itself is (all the more) one big hieroglyph. In the old layout there was less interaction of the cards and this more readily shows distinct patterns. Things like the relevance of court cards show more distinctly too (in answer to questions like “who is this person to me, or do I know him well?). Where the cards are in relation to one another can tell us a great deal The more I have worked with this layout the more I have come to have my own associations and attributions and they continue to evolve. I do still (to a degree) register the old interpretations of Celtic Cross positioning but this layout and my overall approach is much more free form. For me, reading has become less and less about memorizing interpretation but rather what I have to learn in the doing.