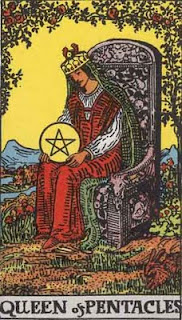 Sometimes I use stories I have heard or things that I have experienced to illustrate something about a card or a symbol. I was talking about the Queen of Pentacles the other day and I remembered a story about a friend’s grandmother that fit perfectly with the idea of resourcefulness and values – based thinking that this card can represent.

My friend’s Grandmother, or Nana as they called her, married very young, probably in her mid to later teens and in the time just following the great depression (the late 1930s). Her husband was a mechanic in a little garage and very traditional in the idea that he was the breadwinner, he didn’t want his wife to work.

Nana was very resourceful, she made her own clothes as well as drapes and curtains. She was a tremendous cook and soon her neighbors were asking her to do some baking for them. She happily obliged as well as making drapes. When her husband came home for lunch, she had to whisk everything out of sight, under the bed or into the closet went the drapes.

Every Friday, she would sit down with her husband after supper and he would give her his pay envelope and she would do her accounts. After the bills were paid, she gave him back the rest of the money (because the man handled the money) and she would keep everything that was a five dollar bill or less. He thought she used that for “pin money”.

One particular Friday, shortly after their first child was in school, probably about 6 or 7 years into wedded bliss, she told him that she had something to show him and he’d better sit down. He refused and asked “what have you done now”? She pulled out a bank book and said “you can buy the garage”. Needless to say he fainted, (he shoulda sat down). One wonders what this woman, with a limited education and the restrictions of her time could have done with a lot of the advantages we take for granted nowadays.