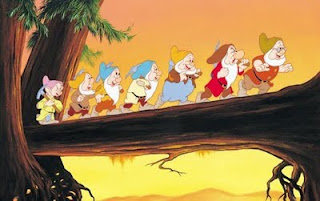 Ever notice that certain numbers figure in folktales? When you’re telling a story to a little kid there’s usually three things that happen, this forms a pattern. There’s usually three wishes for example, or three lessons. It’s standard practice to give three examples before using an “etcetera” i.e.; “you’re fired because you are not a good fit for this company; i.e. your tardiness, poor communication skills, you botched the report, etc.”. Threes are where we see a pattern set in motion or in evidence. Sevens are also a sort of “magic” number. They show up in stories, religion and mythology, for instance there are seven vices and seven virtues. Before Disney homogenized and re-named the seven dwarfs they were, on an archetypal level, what the resourceful daughter (Snow White) had to recognize and transform in herself before going through a re-birth. It is noted that the seven vices / virtues probably were of relevance in the early symbolism and development of tarot as a system. There’s an interesting perspective on this at: http://www.levity.com/alchemy/mantegna.html 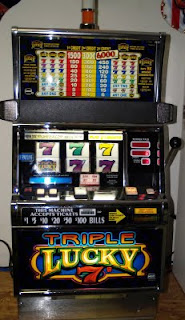 Seven shows up on slot machines and is often associated with luck or chance. In Tarot I find that sevens are the action we take that doesn’t have a guaranteed result. We have to rely on our integrity and our sense of what we need to do regardless of outcome. It usually means that whatever we do, inevitably we will be having a learning experience and it will have consequences. the trick is to stay in the game, learn from and take our lumps and keep on keeping on. Sevens aren’t safe or predictable. They can be a wrench in the works or the breakthrough that gives us an edge. I find there is a clear relationship between the numeric value of the cards AND the positions of the Celtic Cross spread (which I have my own variation on and will post about…someday). I associate position seven with our immediate actions that will bring about a result from our environment (that result is position eight). Sevens help us to see our hidden motives and they are also where we will run into our blind spots. Superficially sevens are about chance or randomness, but at the same time, how we interact with that chance or randomness. I don’t think in terms of luck, rather if I seem to be getting difficult consequences, I have to back up and see where I am blocked or blocking my intent. There is no real learning without this randomness. We would just be following procedure and getting a flat predictable response. There is little growth in that and life would be dull indeed. I remember one of the earliest computer games I ever played was a text adventure called Zork. I played it and played it for about three months and after awhile I thought I had the system licked. I’d found a bunch of the key items and weapons and new the sequence I had to do things in. What kept it challenging, frustrating and fun was a “random thief” that they’d written into the game’s code that could show up out of the blue and rob me. Sevens are like that. There is no clear “right choice”. There is the action we have to take without guaranteed result. They also have to do with things we don’t deserve, like getting mugged or being ripped off, or yelling Bingo. Again, we don’t deserve, but can learn from these experiences. 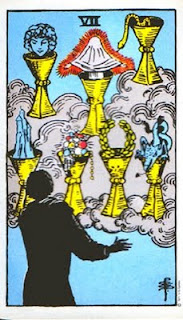 Seven of cups for instance can mean a time of new associations and a mix of characters. For a person looking for a relationship it is tempting to ask “which is the right one?”. But that kind of exclusive choice making is dangerous. It’s better to treat it like a “come as you are” party where a number of different kinds of people are present, all potentially important in their own way. Let them co-exist, keep your options open and see what emerges. T the very least by being open you’ll learn about some different aspects of yourself! Seven of swords can be sabotage but it can also be 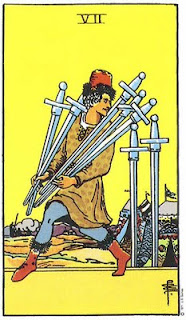 where we shoot ourselves in the foot and have to step back from a greater battle where we would have gotten creamed. It can be a sign of double dealing or deceit and people (or sometimes ourselves) having questionable motives. All of the sevens challenge me to look a little more deeply at what I am actually expecting and the integrity of how I have to behave anyway.