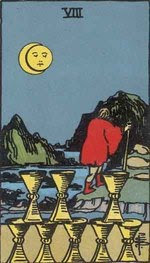 Pamela Coleman Smith, the illustrator of the deck, clearly knew how to draw a proper circle. She also knew how to draw a moon and a sun (as they are part of the major arcana). On the eight of cups she didnt simply draw a moon or a sun. It was clear (in that moment- thanks to Ken) that it is a circle over a circle, most certainly an eclipse. This makes even more sense when we consider the association of the moon card with the unconscious, the primal and instinctive and the sun card with the rational, out in the light of day clarity of consciousness, The eight of cups takes on a greater deeper (and I think far more constructive) meaning. 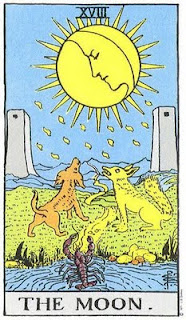 IMPORTANT NOTICE: As of May 9th, 2021: Due to present Provincial restrictions -presently in place until May 30th, 2021- all in person appointments are temporarily

IMPORTANT MESSAGE ON FALSE ACCOUNT SCAMS: Please note if you get a friend or message request on Facebook (or through other media) from someone using

What does this card mean?

I am not a Tarot authority and I’ve never claimed to be. Just because a person has been speaking a language for most of their

To arrange a reading please call

Please note: My number does not receive texts. Booking requires some discussion to find a time that’s right for you and to ensure I am the kind of reader you are looking for.