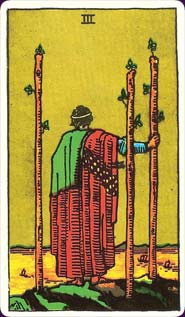 Once again, time has gone by since my last post. Lots of activity around community events and such. Things that have taken me away from blogging, but good just the same to get out of my usual routines and  participate in areas where I can be useful in other ways. I am following the suggestion of a friend who read my post on the three of pentacles and asked about my take on the three of wands. In some ways, my busy-ness has been a kind of three of wands experience.

I generally approach interpretation in a reading on not just the card itself, but what it is saying in relation to the other cards and also what it fits with in what I am receiving intuitively. Sometimes I find that the overall reading is summed up in a particular card and will go into that more in-depth. I always find a richness in Pamela Coleman Smith’s illustrative skill (she was the artist who created the Rider Deck, under the guidance of Arthur Edward Waite).

When we look at the details of the card somethings become quickly apparent. The figure wears a circlet and a tartan. This lets us see that he is a ruler of a particular domain. He has climbed to a vantage point, with the aid of the staves, to look out beyond his known world at a vast sea, which has three ships sailing upon it.

In the Rider Imagery, the “great sea” is often representative of life beyond our comfort zone. The realm of the future, full of risk and potential. Lets remember that in the medieval period that is used in illustration, going to sea was a great life risk. Entire fortunes could be made or lost on just a single voyage. So for our little clan chieftain this is an area of great concern. It means going beyond the idea of  being a big fish in a little pond. risking commerce and trade with the wider world. No matter how big we think we’ve become, there’s always an experience that’s greater. A truly great person is someone who is willing to acknowledge what is greater than themselves and learn from it.

So my usual take on the three is to see it as an opportunity, a doorway into that experience. If what we have attained thus far has given us useful tools we will be able to negotiate through the challenges. It’s a reminder too that success is an ongoing process, we don’t stay fit on yesterday’s exercise. Our growth involves ongoing challenge. Sometimes too we have to let go and let a process work itself through, once we have begun to venture forward it is very hard to just go back to our old ideas of limitations.

A big part of all of the threes is interaction and the emergence of patterns, putting our concepts into action and relating our internal consciousness to the outside world. In the Celtic cross spread the third position is often seen as a start or the first emergence of an idea into actuality, often the basis of a question.