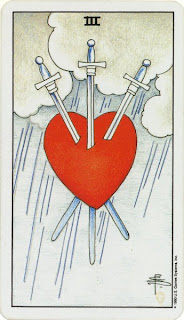 The three of swords always elicits a reaction in a reading. The Rider Waite image, echoed in so many other interpretations is quite dramatic, a heart pierced by swords against a stormy background. Funny that it is such an emotional looking card, being that it is of the suit of swords, cups are generally the suit that refers to our emotional and compassionate functions. Swords have more to do with our mental or analytical approach to things. How we deal with conflict, protect and articulate.

I have found, the more I have worked with the cards that it IS a card of mental function, amidst emotional circumstances. Many resources refer to this as a card of separation and vulnerability. I think of it as a time where we have to look at the interaction of head and heart, both having validity. Sometimes I liken it to a little cartoon, picture an animated heart and an animated brain standing outside a car, figuring out who gets to drive. The heart is very distraught and the head has to intercede. It is at times of emotional distress that the head has to step in, sometimes over-ruling the heart and we have to take sensitive, even painful action that is for the best, like leaving a relationship or acknowledging a hurt. So it makes sense that these times, although emotional, are more of the head, rather than the heart function.

I have found though that the card will also come up at times where we have to let the heart back into the driver’s seat. We cannot always take a rational approach to relationships. Sometimes after a period of healing, we have to allow ourselves to take risks again and that means being vulnerable. So sometimes the card (depending on other influences) can mean coming out of a time of separation, feeling the sensitivity of healing. Just like the pain of a numbed limb coming back to life again, the three of swords says “if you can feel it, you can heal it”.