Why I Usually Work With The Rider Waite 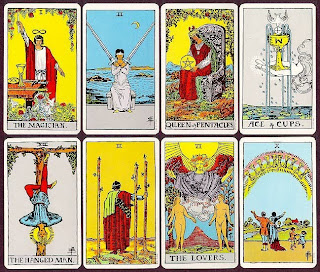 Most of the time, I use a Rider Waite Tarot deck (yes it should be called the Smith deck, but that’s another post). Partly because it is the most common deck and the deck that has had more artists base their interpretations on than any other. This allows for a very important level of congruence. In other words if you work with a Rider deck its easier to understand a variety of other decks.

Is the Rider deck “best”? I know of a great many readers who find it flimsy, stale or not their cup of tea. Its like (very much like) comparing apples to oranges or better yet a Mac to a PC. PCs are probably not the better system – BUT they went into greater use. Same as Beta to VHS.

I use a Rider because it is fluent to the needs of what I have to work with, it illustrates well. I believe the artist, Pamela Coleman Smith, was a gifted illustrator. Although the Rider is not as artistically pleasing as say the Arthurian Tarot, doing a reading for Jane Q. Public with the Arthurian Tarot would be like (again this is JUST me) reading the weather in Arthurian English;

“thy skies will be cloudy, but verily there is a wilde storm front…zounds!”

IMPORTANT NOTICE: As of May 9th, 2021: Due to present Provincial restrictions -presently in place until May 30th, 2021- all in person appointments are temporarily

IMPORTANT MESSAGE ON FALSE ACCOUNT SCAMS: Please note if you get a friend or message request on Facebook (or through other media) from someone using

What does this card mean?

I am not a Tarot authority and I’ve never claimed to be. Just because a person has been speaking a language for most of their

To arrange a reading please call

Please note: My number does not receive texts. Booking requires some discussion to find a time that’s right for you and to ensure I am the kind of reader you are looking for.